This summer I took my very first yoga class, outdoors, while visiting family in Wisconsin. It seems all my friends are yoga-fanatics, yet I have always stuck to my dance guns and never experimented. It was eye-opening, the parallels astounding. And much more difficult than I imagined. Not physically, I’ve been dancing since I was a kid, but mentally. Maintaining focus, without music to transport me, is almost impossible. I found my mind wandering, to whether Byrne would have liked yoga. In some ways I’m sure she would have – getting bodies moving was always something she celebrated. Yet I know she found the part of every dance class dedicated to technique boring. A necessary evil, before the music played and improv began.

So I asked Judean about it. She’s the Savannah yoga teacher who is one of Byrne’s many adopted daughters. She thinks Byrne exemplified yogic philosophy. Especially in how stoically she coped with all her physical and health problems  (the cancers, the spinal surgeries, the blood clot, the blindness)

“If anyone expressed admiration about her ability to cope she would answer “it’s just that I’m selfish and I want to be happy.” But this is really her saying that she chooses to be at peace, not dependant on outside sources for her happiness. ” She thinks Byrne’s definition of being selfish is really being self-less. “Each moment that you are happy is a gift to the rest of the world.”

I remember that Byrne too. The one who said that her mind contained many rooms. That if she found herself dwelling in an unhappy room, she moved to another room.  More from Judean: “Byrne had wonderful foundational memories of being loved, but she let her life build and she evolved – she never got stuck in a place that made her miserable.”

Another concept from yoga that Judean finds parallel to Byrne is that you have to “adjust, accommodate and adapt” to change. “Love all, serve all, do good, be good. Realize.”  Byrne’s way was to accommodate and adapt to changing circumstances. Like when she lost her sight. She just organized her refrigerator so that she knew exactly where everything was.

“If you go in there,” she’d say “make sure you put the orange juice back exactly to the right of the milk so I know where it is when I need it.” 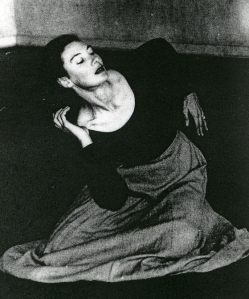 I’ve included this photograph of Byrne because it’s Judean’s favorite. “It captures the true Byrne,” Judean says. Every muscle in her body is engaged in the action. Her face is aware, the neck is taut, tendons stretched. One hand is almost limp and the other clenching. It looks like a modern floor spiral but on closer examination she is just sitting on her knees pivoting at the hip. Simple really – but the pose is so striking and strong and expressive.

“She’s so large in this picture. Every part of it is expressive. The heaviness of the head, you can tell there is weight there. The limp hand and the curled fist – a study in contrasts and complexities.” Just like Byrne.

This entry was posted in travel and tagged serve all, Yoga, yogic philosphy.

2 thoughts on “Byrne and Yoga”

I think she incorporated some yoga relaxation positions in her teaching techniques. I remember very vaguely a Buddha-esque sitting/breathing position.

Some of her warm up positions were directly from yoga. Her core work is very much a part of yoga and some of her corrections on getting into balancing poses are the same as you would get in yoga class. All of this I didn’t find out untill I took up yoga after Byrne’s death. I wish I knew if she knew the connection.