When Horror Presents Itself…

I’m on a comedy-writing roll. Mostly because I love it, but also because all the screenwriting gurus say you need to pick one genre and stick to it. Or as a manager I met at a pitch fest told me “You have to be in a box before I can get you out of it.” – Christopher Pratt.

Still, I’m tempted to try horror next. Purely because of a shoot I just wrapped in Muscatatuck, Indiana. Don’t get all insulted, Hoosiers, this isn’t a statement about your state. It’s just that one of the premiere military training centers in the world also happens to rent out its facility to filmmakers. The Muscatatuck Urban Training Center, which used to be a state mental asylum, is literally a 1,000 acre Disneyland of Disasters. All the old, art-deco hospital buildings double now as “embassies” and other “assets” military types need to train to defend. 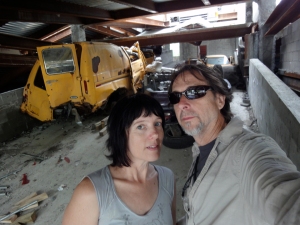 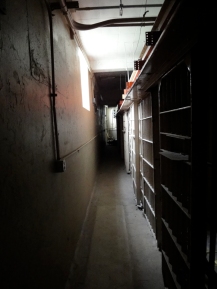 They call it a full-immersion contemporary urban training environment. Which means they’ve built things like parking garages that collapse on command, to practice difficult urban search and rescue techniques. There’s an oil refinery that can explode at the push of a button, a pre-flooded suburb, and 1,866 feet of tunnels dug under an old prison.

While we were there shooting a project for FEMA, so were the Israeli Defense Forces. That’s how cutting edge it is. But what fascinated me the most was the creepy factor. There’s a haunting, man-made reservoir on the border of the property, surrounded by deep woods and FEMA trailers. Yes, the post-Katrina kind rejected for mold issues and now deemed toxic. We four-wheeled through the woods on Kubota go-carts only to find a trailer graveyard, doors swinging open with scary creaks.

Then there’s the Mental Hospital Museum. We used it as headquarters for our shoot, trying to ignore the 1950s–era instruments hanging from its walls. Hard to do when your laptop is set up under a straight jacket, very Silence of the Lambs. Even better is the automatic spoon machine used to feed the patients in the jacket. I couldn’t resist this photo. 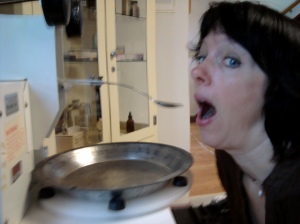 The director says when he was charged with curating the collection, it looked as if all the patients up and left in the middle of the night. (note – there is an unmarked cemetery right off base…hmmm) He says you could get the place up and running again in a couple of months – if there was ever a need to return to mid-Reagan-era mental healthcare. Which is, of course, when mental patients all over the country  were booted out to fend for themselves. See, I wasn’t kidding about the horror part.

Only if it was a movie, you could happily munch popcorn while you scream. Even the logo works. “Defend the homeland. Win the peace. As real as it gets.”

This entry was posted in travel and tagged Screenwriting.

6 thoughts on “When Horror Presents Itself…”

Amazing what one can discover reading friends’ blogs. The good stuff never seems to surface over a drink. So I propose next time we order a pitcher.

Whoa, count me in.

There has got to be plenty of material for your next book there, Teresa!

I think I’m going to have nightmares from reading the blog. 😦

i was there before the conversion to a training center. it was very very spooky. dental utensils still on trays positioned over dental chairs, school desks, etc. etc. very odd.

oh, and did I mention the restraints, some for laying down, some for folks standing up, but you could wheel them around… looked like a torture farm.

I know! Creepiest of all is the cemetery outside the grounds.