When you live in a place where you can literally paddle your kayak from your backyard to a downtown bar, it seems silly not to. Especially when one of your band of three mermaids is going back to college in a place where the only gators are on T-shirts. But a funny thing happened on our way to Hemingway’s last night. The tide was in our favor, seducing us into thinking we wouldn’t have to paddle too hard. Our journey to send off Susan in style would be more like a float. There were dolphins following us, a perfect excuse for a champagne toast on board our kayaks. What did it matter that the bubbly blew back in our faces? It was just a little head wind. We’d just have to shout louder to hear each other’s tall tales. It was a beautiful evening, didn’t even feel like the 95 degrees the thermometer said when we set out. For a three mile tour. Sing it with me. A three mile tour.

The weather started getting rough. We were still laughing. Susan held onto her hat. Lolita told some friends from her church, who passed us in a motor boat, that we were on our way to Hemingway’s and bless their hearts, no, we didn’t need a lift. Another friend of hers waved from his long dock stretching into the Beaufort River. A true Southern gentleman, he asked if we needed libations for our journey. We laughed, and kept paddling. It seems Lolita knows all the owners of homes with docks along the Old Point. We could have tied up at any of them, but it seemed unsportswoman-like. We told each other we’d never hear the end of it. There was only one little bolt of lightning in the distance. We just needed to hurry up. It wasn’t until I took my sunglasses off that I realized the sky over downtown Beaufort was black. It was about that same time that Susan noticed white caps under the bridge.

I was about to pass under the line of a fisherman standing on the seawall of Waterfront Park when it occurred to me that he was struggling to keep hold of his rod in the wind. I turned to shout at Lolita. We should go back to her friends dock and tie up. That’s when my kayak flipped. I have no idea if it was a burst of wind or a wave just caught me broadside – all I could think of was that fisherman’s hook flailing around in the same water as me. I was worried for nothing. Susan had her trusty knife and cut the line before the wind blew her back toward the bridge. One nice thing about 95 degree days is that it keeps the river warm. I was treading water and trying to flip the kayak upright, but it kept flipping over and over in the wind, away from me.  When I finally caught up to it and pulled myself up, I realized my paddle was halfway back to Pigeon Point. Along with my shoes, and hat and bobbing red cooler. 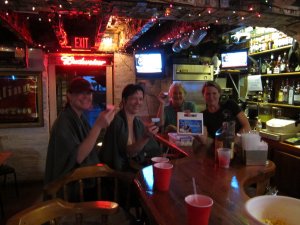 We still made it to Hemingway’s – by foot instead of kayak. We left them under the bridge in favor of the kind of hospitality the South is famous for. Our menfolk had already combed the waterfront and given Hemingway’s a heads up to keep an eye out for us. And Lolita’s boating friends called the bar to make sure we arrived. The bartender gave us thin green tablecloths to use as towels, and after a few shots of rum, to wear as sarongs. We didn’t even need the first-aid kit; we just thought it made a good prop for the photo.

Lolita, of course, had the most practical take-away from the whole adventure. “That’s why it’s always a good idea to label your things. Just in case they float away.” Three cheers to that!

This entry was posted in travel and tagged Storms.

2 thoughts on “To Hemingway’s, come hell or high water”

Dear Esteemed, Most Beautiful Mermaids; A priceless tale of bravery, bravado, and beverages…