Celebrating The Other Mother

A sixteen-year-old girl from Beaufort High School bought a copy of “The Other Mother: a rememoir” on the night of it’s launch. Here’s why that makes my heart do a grand jete. It isn’t a YA book about young love, vampires or zombies. It isn’t about a celebrity or anyone her friends tweet about. It will never be made into an app or video game. So why did she part with hard-earned babysitting money to buy a 417-page book about my relationship with a former burlesque dancer named Byrne Miller?

“I danced for Ms. Miller in the Nutcracker when I was four,” she told me.  “And I never knew she was so amazing until tonight.” 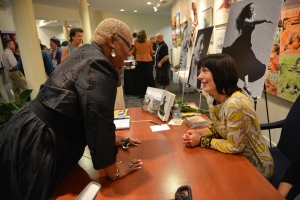 Almost five years of research, writing, rewriting and planning this book’s introduction to the world was worth it in that instant. Byrne was Other Mother to me and many other former dancers in the audience of the USCB Center for the Arts. We were all drawn to her exuberant positivity and consider ourselves lucky to be her collected children. One of the best parts of writing “The Other Mother” was the reuniting with many of them, telling and retelling the stories Byrne planted in each of our hearts.

But I wrote the book so that the next generation of young women would have the chance to know Byrne Miller too. I told the unbelievably big crowd of book and Byrne lovers that all young women deserve the wit and wisdom of an Other Mother. 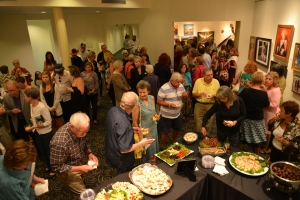 I’m a first-timer.  I have no other book launches or signings to compare to Byrne’s kickoff celebration. All I knew was that I wanted it to be an event worthy of the woman with a whim of iron who introduced modern dance to the Deep South.  I also wanted it to be an homage to my adopted hometown – the place Byrne and Duncan Miller chose, as I did, to live and create. Beaufort is more than a setting in this work. It is a central character.

After sharing some crowd-pleasing passages from “The Other Mother,” I watched from the back of the auditorium as two groups of dancers performed modern and contemporary pieces choreographed in Byrne’s honor. I confess when the idea for making the launch more than a typical book signing first occurred to me, I was worried that the dancers I’d invited would wear the kinds of costumes you see at recitals or that their moves would mirror what you see on music videos. Byrne was an unrepentant dance snob and even twelve years after her death I’m certain she could still summon lightning bolts of judgment.

But the moment the music started I felt my muscles lengthen, my posture correct itself and tears roll down my cheeks. These Beaufort Middle School and High School dancers are the living, breathing legacy of what Byrne Miller started decades ago. On the night of the worldwide debut of a book in her honor, they were lyrical, expressive and as committed as any modern dance company the Byrne Miller Dance Theatre ever brought to Beaufort. And if even one of them loves reading “The Other Mother: a Rememoir” I will be as proud as Byrne surely is.

This entry was posted in travel and tagged sisters, The Other Mother, USCB, USCB Center for the Arts, women.