My taste for mescal started on a road trip through Oaxaca, a stopover on a journey down the Pan American Highway in a vintage 1968 camper. Modern day Oaxaca is not particularly camper-friendly; the streets are narrow and filled with empanada stalls and hippies selling hemp necklaces. But thirty minutes up the hillside above the city we found an American who operated an RV-park of sorts in a field of experimental mescal plants. Here’s an excerpt I wrote in a journal I kept on that roadtrip:

“Douglass is a twitchy 52-year-old, originally from California, who looks like he should have a long surfboard strapped to the top of a VW bug. He is convinced that mescal can be distilled from more than just the 16 varieties of agave plant customarily believed to be possible in the industry. It’ll take nine years to fully prove his theory; these plants don’t grow to mescal maturity quickly, but we sipped two varieties from recycled glass jars that Douglass filled with a plastic funnel. The youngest, cheapest variety scoured my esophagus. But the more expensive variety, aged in oak barrels like a fine cognac, passed through my throat with a smooth, low vibration and a hint of woody sweetness. When Douglass bottles and sells this line of “El Scorpion” mescals, he puts a dried scorpion exoskeleton in each bottle. Local Indians who once laughed at his horticultural ideas now stop by his house everyday to fill their own plastic containers.”

Leaving Oaxaca on that roadtrip, near a village called Santiago Matitlan, we found an indigenous mescal maker named Martin Garcia whose spirits we like even better (and have returned many times to buy more). But it turns out Douglass-the-American got the last laugh. His “El Escorpion” is now exported and available for close to $40 a bottle in the U.S. The mescal industry has gone from Mexican moonshine to the new, hip drink in swanky cocktail lounges – lauded in articles in such unlikely places as Garden-and-Gun and the Wall Street Journal.

All of which is part of the reason Martin’s mescal has also gone up in price – from $5 a bottle three years ago to $25 a bottle now. It’s still worth every peso. Not only do you taste nothing but the agave plants he roasts on site, but it has meant a better living for Martin and his wife. They’ve expanded, from a one-horse operation ten years ago to two today. They’ve planted more acreage and built a proper stand from which to sell their varieties. Martin wasn’t shocked to hear that high-end mescal bars in neighboring Oaxaca sell shots of the best stuff for $10 each – because he says the government has its hand out now. Taxes have skyrocketed, both on the land and the product he makes from it. Banditos have taken to stealing agave plants in the dead of night. Still, he’s making a good enough living that one of his sons wants to take over the family business. He’s even modernized the label – from a rustic image of a sombrero and the name “Mi Gusto Es” (It’s My Pleasure) to a stylish skeleton festival scene under the name “La Comparsa” – costumed carnival-goers. A perfect invitation to join the band wagon. 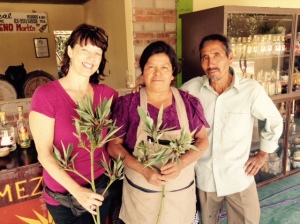 This entry was posted in travel and tagged Mexico, Oaxaca.