In less than 24 hours I feel like a celebrity in Myanmar. I’m drenched in sweat, my hair is haphazardly clamped up off my neck and I’m sporting none-too-sexy cargo pants yet natives keep taking my picture.

I am walking around the docks of Yangon with my photographer husband who is happily capturing the magic hour of golden light when it first happens. Gary always asks permission of the people he approaches. So I’m not surprised when the young man squatting on the prow of a motorized dugout canoe nods a casual yes. Or that Gary instantly offers the camera’s viewfinder up so this man who ferries chickens, bananas and street food vendors across the river all day can see his own portrait.

In most third-world countries where we travel and shoot, the subjects of Gary’s digital street photos grin or giggle when they see themselves in a monitor, possibly for the first time. But this barefoot young man in a traditional longyi cocks his head, checks out his look and casually shrugs his shoulders. Then he whips a cell phone out of top fold of his longyi and snaps a picture of us.

I’m shocked. I thought Myanmar was right down there with North Korea in cell phone penetration. We’re talking about a country of 65 million people who up until a few years ago were suppressed by a military junta. I’m sure on a Burmese Facebook page somewhere there is a shot of two jet-lagged Americans, mouths gaped in astonishment.

The next time I get the paparazzi treatment is as I step out of a boat to check out a 170-year-old monastery on Inle Lake. Again, I’m caught completely off guard. I’m surrounded by an architectural and spiritual beauty revered for centuries and yet cell phones are emerging from longyis and snapping photos of me. I feel like a specimen, a cultural curiosity suddenly on the other side of the camera.

“Is it that I look American?” I ask Gary. We do come from a country that only recently lifted travel embargoes and we’ve yet to meet another American tourist on this trip. Maybe I should enjoy the brief period of novelty before this country begins a predictable love/hate relationship with U.S. tourism.

“And that would distinguish you from German, Swiss, Canadian and Australian women how exactly?” Gary responds.

It isn’t until two policemen guarding our newly built, Chinese hotel in Mandalay take my picture that the truth occurs to me. Spoiler alert – it isn’t about me.

This is simply a country full of people who have just entered the cell phone age. Mobile giants from Norway, Qatar and Japan pounced on government contracts in 2014, getting in on the bleeding edge of connectivity. 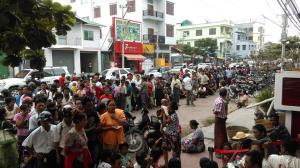 Here’s a picture from one of those company’s Facebook site the hot August day they started selling cell phones in Mandalay. The cops taking my picture with their phones right now were probably in that line somewhere.

The number of mobile phone users in Myanmar is expected to reach up to 80 percent of the country’s population during the fiscal year 2015-16, according to Ministry of Telecommunications and Information Technology. Even if that number is wishful thinking on the part of the military government, the fact that it is wishful is illuminating. The military could have followed Kim Jung-un’s lead and kept the country disconnected, in the communications dark ages. But before I get too impressed with Burmese political altruism I read this in the Financial Times.

For the new rulers of the state still known to many as Burma, a mobile-phone network is precious because it’s a rare way to make a demonstrable change to people’s lives before the polls.

I knew it wasn’t my fashion sense. And my Americanism is not so intriguing that my every step is documented by the natives. My would-be paparazzi are just Burmese people suddenly connecting to the rest of the world. Myanmar is a ten-year-old girl with her first camera phone. She is obsessed with a new toy. Watch out world. Next will surely come the avalanche of Burmese selfies and photobombing.

Reblogged this on TeresaBruceBooks' "Right Brain Safari" and commented:

Photography in Burma goes mobile — you read it here first

Interesting post! I had that experience when I was in Beijing last summer. Many Chinese people took pictures of me and my two (blond) American companions. Sometimes they asked us if they could take our pictures, sometimes they didn’t. I assumed it was because of our white skin. There weren’t a lot of white people around us, even in Beijing. I noticed on the Great Wall that the one African person I saw was also surrounded by a bevy or photographers. I have curly hair, and a number of Chinese people commented on that as well.

I bet! Another plus, for me at least, is that at long last I felt tall!