Thirty minutes into the line for Voodoo Donuts, it occurred to me that the Portland I grew up in wasn’t nearly as edgy, earthy or hipster as it is today. I texted my sister, who also grew up in the Rose City and then lived most of her adult life on the East Coast.

“Why wasn’t Portland cool when we were growing up?” I asked.

My attention wandered as I waited for her reply. A witty Millennial functioning as line motivator/donut huckster was describing how one uses the pretzel extruding from the trademark voodoo doll-shaped donuts to stab its belly until raspberry goo oozes forth, ensuring a tasty curse.

“Because we lived there,” my sister texted back. Touché. A response worthy of an ad-libbed line from the fame-inducing series Portlandia.

She’s right, of course. But when I was in high school the town was still in the awkward, pre-pubescent stage long before its voice dropped to sexy. Nobody bragged about being from Portland, except maybe Tonya Harding before she reached for her tire iron.

It still rained, but no Grimm TV series had turned the slick street gloom into glam. Athleta and Lululemon hadn’t yet invented attractive outdoor fitness fashion so our galoshes and parkas made us look like lumpy fourth-graders.

People were still glow-in-the-dark pale when I lived in Portland. But back then Goth wasn’t in and we were embarrassed by our ethereal skin tones. The joke was Portlanders didn’t tan; they rusted.

We still had coffee and beer but they came from jars of Folgers in your mom’s kitchen and from cartons at the back of gas station convenience stores.

The Portland of today is Darwinian in its greatness. People like me and my sister left and only the hippest have survived. There is evidence everywhere that Portlandia has captured the zeitgeist of a new culture.

If you eat out in Portland you will be told the birthplace of every ingredient. On my Saturday morning hike through one of Portland’s forests I passed ferns and wild orchids whose cousins I ate the night before. 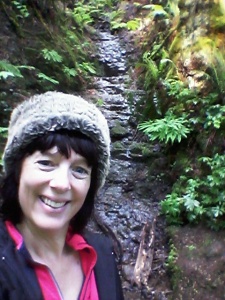 When I stopped to see what the asking price was on this cute little cottage in the Northwest quadrant I realized the owner wasn’t displaying real estate brochures but poetry.

Look closely at this mom’s stroller. It’s attached to a skateboard. I looked around, expecting to see Carrie Brownstein and Fred Armisen.

In this hometown I barely recognize I’m not sure if life is imitating art or the other way around. If anything, Portlandia overemphasizes the “keep Portland weird” vibe and underplays the city’s friendly sophistication.

We were there, for example, for a major fine-art photography portfolio review and month-long celebration of the art form called Photo Lucida. In my day, a photo exhibit in Portland meant landscapes of neighboring Mount Hood printed on canvas. But so many in-the-know Portlanders turned out for the night the photo review was open to the public that the fire marshal had to shut down the Portland Art Museum. 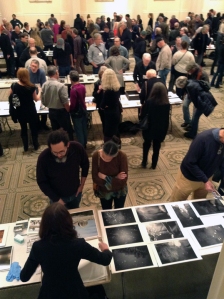 I live in the South now, a region heralded for its hospitality. But it was in Portland that a parking lot attendant saw me wadding the wrapper from my messy, trendy food cart lunch into my backpack and abandoned drivers to show me the nearest garbage can. Then he ducked into his little key shed and reappeared with a roll of paper towels and hand sanitizer.

I knew I was developing a major crush on my new old hometown when I finally reached the end of the line at Voodoo Donuts. The sweet yeasty smell from my freshly baked, over-frosted voodoo doll wafted up to my cold red nose and I must have swooned. I suddenly couldn’t think of anyone to curse. I was so put-a-bird-on-it, tree hugging, never-shaving again happy that I forgot why I was holding the tiny stabbing pretzel in my fist.

Luckily my aunt Ronell, an old-fashioned kind of Oregonian who still drinks beer out of a can and thinks skateboards are for little kids, was by my side. She put down her traditional maple bar and whispered a name into my ear. It was just the spell-breaker I needed and I plunged the pretzel into the jelly-filled belly of the innocent donut. My sister was right. I’m not chill enough to be born-again Portlander yet.

4 thoughts on “My Portlandia Pilgrimage”

Hey Teresa: Never knew you were from Portland. I was there for the first time in 2012 and loved it, but I would never wait in line 30 minutes for a doughnut, even if it let me curse someone.

Hmmm…. think about it Jack. There might be a certain person worth waiting in line to torment. He shall remain nameless.

I’ve lived here 20 years now, and even back in 1995 the city was vastly different. I remember when Alberta was a ghetto, not a trendy destination with 30-minute lines outside an ice cream parlor. My, how the city has changed!

And I wouldn’t live anywhere else…