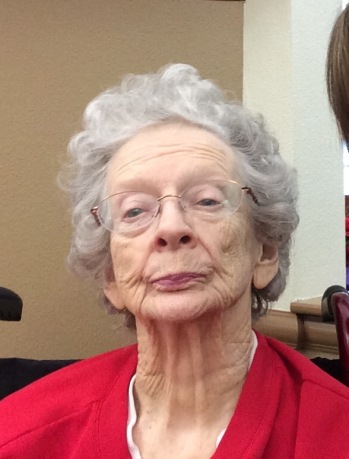 My grandmother Nellie has no idea why the staff of her nursing home ask if she’s related to Dame Maggie Smith: she’s never seen an episode of Downton Abbey. But if I put on a fancy hat and tell her I am Lady Mary she’d squeeze my hand and agree. She can still place a face, just not with a name. Or, as she puts it, her “forgetter works real good.”

Even in the advanced stages of dementia my granny can still summon a good one-liner. She’s had 92 years of practice. I’ve been on the Lady Mary end of her sharp tongue for quite a few of those years. Like the time I told her Ronald Reagan seemed like a good president and that I was joining the Young Republicans club at college.

“I will not stand for a granddaughter of mine to display such utter ignorance of history,” she wrote in the first of weekly letters and newspaper clippings she mailed to me until the day I registered as a Democrat.

Then there was the time she asked if I was making the same salary as the men at a newspaper where I had a paid internship. I said no – the only other intern was married and had two kids to support so of course he got paid more. It was as if I’d single-handedly unraveled the equal rights amendment.

“We did not work so hard for so long to be forgotten so soon,” she fumed. I learned that she had always wanted to go to college, to become a geologist. But the rich Texas uncle she turned to for tuition said the money would be wasted on a woman. She’d just drop out, get married and have babies.

So she never got to go to college but she did end up having babies, and more than a few marriages. One of them was to a union man, who encouraged her to organize the women where she worked: the ice cream counter at a department store in Portland, Oregon. That’s where she really started running circles around the Dowager Countesses of her era.

She not only unionized her shop, she became the Vice President and Political Director of Oregon’s AFL-CIO and chief labor lobbyist at the state capitol. I wore a wooden sandwich board sign hand painted with “vote for my granny” when I was eleven. She lost her only attempt at elected office but defeat made her stronger. She went to China with a television reporter and unleashed her righteous indignation on Oregon’s own Nike Corp for the unsafe working conditions in its factories. She became the kind of power broker usually reserved for good-ol’-boys in smoke-filled rooms. When she backed a politician they won the race but lost the chance to ever back down on her issues. Or skip one of her birthday parties.

She gave speeches and kept the notes, marked up for pauses and dramatic emphasis. I’m reading them now because my aunt has asked me to prepare an obituary when the time comes. These typewritten pages are a window to a different world. In one speech my granny coined a phrase for the women she was recruiting: the “until” workers. They were content to make less than men because they were only working “until” the furniture was paid off, “until” Junior got through school or “until” their husbands got their jobs back.

I can picture her in her gold-rimmed glasses, wide-collared pant suits, burnt orange lipstick and hair-sprayed up-do, lecturing women who couldn’t visualize themselves as equal to men. Even the Dowager Countess would have cowered. But not me.

I got to be her Lady Mary. My tough-as-nails granny knew exactly when to scold and when to support her oldest granddaughter. After outliving four husbands, the one thing she never attempted to organize was my heart. When I broke up with my first, too-sweet boyfriend in college he wrote to my grandmother, begging her to make me reconsider. She only told me to make sure to find an equal match the next time. When I introduced her to the man I eventually married, my then 80-year-old granny shook Gary’s hand and gave him her business card.

This Sunday he will sit next to me and watch the final episode of Downton Abbey. There will be a box of tissues and a bottle of Tequila in front of me and when I sob at the sight of the actress who reminds me so much of my granny, he will suggest I propose a toast instead. To Maggie Smith for playing a reflection of the woman Nellie Fox actually is.

This entry was posted in travel and tagged organized labor, Ronald Reagan, unions.

Absolutely loved this, Teresa. Thank you for sharing your granny with us today.

This is a wonderful tribute and remembrance. I too, have a special place in my heart for my Grandmothers.
They both caused me to be a democrat and enlightened me toward a social consciousness. Your blog brings
back so many special memories of my time with them. Thank you, Teresa.
Jane Hearn

You’d mentioned your grandmother in passing over the years but I had no idea she was so amazing! I definitely see her influence on you and so, you carry something of her with you, which is lovely.

Thanks for sharing. How lucky to have such a force in your life.