The Mother of Reinvention

For a few years now, I’ve been blogging about Other Mothers. The title of my blog — Womenisms — was a word I invented to describe the spoken wisdoms of my own Other Mother: Byrne Miller. She was a champion of reinvention, something I passed on in my TEDx talk before the book launch. So I think she’d love the fact that I’ve renamed the blog “TeresaBruceBooks” and made it simpler to find on the web. Now all you have to google is teresabruce.me.

Me — my latest reinvention. By way of Halloween and Frida Kahlo.

I’m not alone in long admiring Frida — as much for her fierce spirit as her art — and I always make a pilgrimage to her house in Mexico City whenever we pass through. So when I stumbled upon a stack of vintage, velvet-and-beaded tops in an antique store in Oaxaca I couldn’t resist. It was torture waiting for Halloween, to add the faux jewels I picked up in Milwaukee Goodwill stores and Byrne’s antique poison pendant.

As Frida impersonators go, I’m a white girl without enough hair. But then reinvention isn’t about copying and it’s never permanent. My homage to Frida was a chance to open my mind, to more fully imagine her life and look at mine through her lens.

It wasn’t until I penciled in the unibrow that the transformation, however temporary, began. I, like most self-critical American women, fastidiously shave and occasionally pluck to fit the norms of our society. But flaunting the unibrow was more than liberating. It felt beautiful and defiant — unapologetically earthy.

The costume party I attended as Frida-light was a spectacle of reinvention. Watching all my friends in their creative alter-egos made me realize we all crave reinvention. Hiding behind a mask is actually a chance to parade the inner self. It took a trip to Mexico to make me want to stomp my feet and join in.

Since my new, reinvented blog allows me to insert videos — take a look at this one. Byrne would have loved these dancers — ordinary villagers who reinvent themselves every chance they get. Viva la transformacion!

This entry was posted in travel and tagged dance, Reinvention, TED Talks.

My TED talk — “The Wisdom in Quitting: Lessons from my Other Mother.” 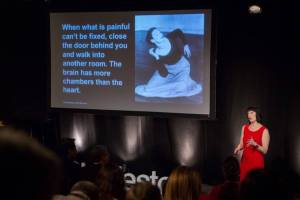 A tiny microphone floated on a wire curved around my face to rest an inch from my lips – like a little moon orbiting my planet. The tag inside my new dress scratched against my sweaty skin and I wondered how long the coat of mascara expertly lacquered to my eyelashes would stay dry and put. I paced behind a slit in a heavy black curtain for a charismatic emcee to finish his introduction of me.

I haven’t been “on-deck,” ready to go out and perform a routine since I was an 18-year-old rhythmic gymnast trying for a spot on the U.S. Olympic Team. I quit competing a lifetime ago when I broke my back and yet there I was, as nervous as if I was about to take the floor in front of a panel of judges.  That was when I laughed – and thought of my “other mother:” Byrne Miller.

This TEDx talk wasn’t about me trying to score a perfect 10 – it was a chance to share her story with people who didn’t have the luck of knowing her in person. I could practically feel Byrne’s presence – not like a guardian angel hovering protectively, but in the front row, reveling in the attention and beaming.  She once told me her secret dream was to rent out Lincoln Center and have her favorite modern dance company perform just for her but I couldn’t help thinking she would have loved this even more.

The TEDx 2013 Charleston theme was reinvention, and I was the kickoff speaker. There’s something about the story of a burlesque dancer who believes that, to build confidence, all women should have at least one affair that wakes up an audience. I talked about how I’d always been afraid to quit anything before I met her. I was afraid because I equated quitting with failing and I was raised to be a perfect daughter: an Olympic gymnast. Never mind that I hated competing and loved to dance more than anything. Quitting, especially when I was ranked 4th in the U.S. and the top 3 were going to the Olympics, was out of the question.  It took breaking my back before I felt like I could quit without being a quitter and I was still trying to be the person my parents expected me to be when I met Byrne Miller.

I was drawn to Byrne because she seemed the opposite of a quitter. But in the course of researching her life for the memoir I realized she just called quitting something different: walking into another room. She reinvented herself continually and she wanted all of her collected daughters to have the confidence to do the same.

All of that, and so much more, is about to be published in the book. But I’ve never spoken to any group of strangers about this part of my life, and how it intersected with hers. I wondered if the message would resonate with a TED crowd. I wasn’t talking about a cure for cancer, or how to change the world. But it turns out that my very personal experience is actually universal.

Men came up to shake my hand and say how they tweeted Byrne’s “womenisms” throughout my talk. One dad told me he was going to talk to his kids that night and make sure they understood that even though he’s proud of them that they have the right to determine their own identity. A woman in her late 50s said she’s quitting her six-figure career of 30 years and my story gave her the reassurance that it’s okay – not crazy – to redefine herself. I gave her a card with a snapshot of Byrne and one of her favorite sayings: “Love is more disarming than logic.”

I would have been dancing on air if those were the only three people who talked to me throughout the day. But my favorite new sister-by-Byrne was a woman whose husband just got a job at the Citadel. She towered above me, as gloriously tall as Byrne once was, and said that she always thought she was too big to be a dancer. Now she leads a weekend dance “church” open to all women and children who just want to move.

At the reception I met a woman my age who had also been an elite gymnast and trapeze artist. She broke her back not once but twice before she listened to her own heart and became a clothing designer. I met not one but three daughters of immigrant parents who knew exactly how hard it is to quit anything when you’re supposed to be perfect.

I felt like everyone in that audience was already dancing with Byrne. Being a quitter never felt so victorious.