Art can transport you to another place. It can pause time. But it can’t stop it. Yes, I’m on about time again, because on our New Mexican ramblings I got to see two places I assumed art had immortalized.

The first was the site of the adobe church in Hernandez where Ansel Adams famously captured a lonely moonrise. It’s my favorite of all his images because I’ve always imagined this desolate, remote place as protected, looked over each night from above. I’m not religious but this photograph explains why people have faith. It reminds me of the aloneness I felt as a kid living on the road with nomadic parents. No matter how far from home we traveled in our dilapidated camper the same moon still rose and set above me.

Ansel Adams could not make his photograph today. The dirt road where he set up his tripod to capture the moonrise is now a four-lane highway, minutes from a sprawling, dusty city called Espanola. Even under the glow of a rising moon you couldn’t see the church’s cross from the road’s high vantage point because it is obscured by ordinariness. Its foreground is subtracted, diminished by squatty buildings, power lines, unloved yards and broken down cars.

We drove down to the church anyway and I asked Gary to take this picture in the dog hours of the afternoon. He didn’t have a wide-enough lens to document the surrounding squalor so this shot makes it look better than the harsh truth. The sun felt like it was peeling back my skin, branding me with disappointment. Even the graves to the side of the adobe church seem abandoned and overrun by time.

The same disappointment washed over me when we stopped at Francisco de Assisi – in Rancho de Taos. The view of this church that Georgia O’Keefe painted was never meant to be photo realistic. She isolated the lines, blended colors and smoothed shapes into the weathered strength she saw in all of New Mexico. But it had always been real to me, my favorite of all her paintings, until I saw it in person. It’s hemmed in by Taos now, buildings so close on three sides it feels claustrophobic. 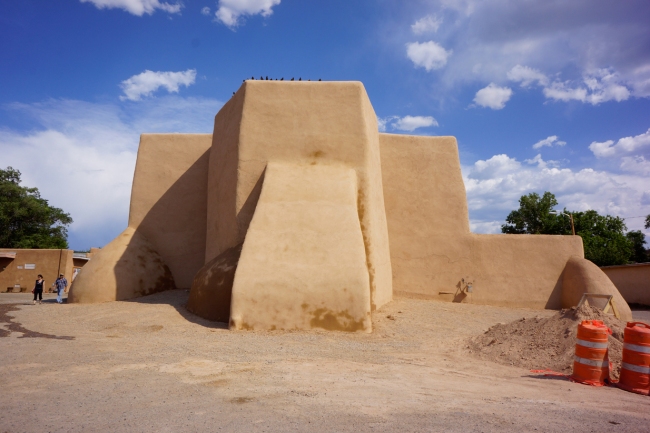 It was under renovation when we arrived — the patched up adobe still wet and the smell of straw filling the air. In a way the construction debris made me feel better – this place is still revered enough for periodic face lifts.  I have no right, I realize, to demand that time stand still for my benefit alone. I don’t even worship in these structures built by those who do. And that’s the crux of it. I’m clinging to an aesthetic while those for whom Hernandez and Assasi were intended experience it as a living house.

It was less unsettling, in a sad way, to find these ruins on our way to Georgia O’Keefe’s studio and house in Abiquiu. This once beautiful adobe outpost of faith is returning to a state of rest – dust to dust, literally. There are telltale signs that it will be missed – a giant handmade cross leans into a patch of dead cactus and someone tacked a rosary to a crumbling wall.

Perhaps, when it is gone, its absence will be more present than famous churches, forced to coexist and change along with us.

This entry was posted in travel and tagged New Mexico, Photography.

Reblogged this on Right Brain Safari and commented:

A traveler’s joy and remorse — can you even “go home again ” to a place in your heart?

[…] A Picture Can’t Stop Time | "Womenisms" on Jul 2, 2013 at taos nm – Google Blog Search: She isolated the lines, blended colors and smoothed shapes into the weathered strength she saw in all of New Mexico. But it had always been real to me, my favorite of all her paintings, until I saw it in person. It’s hemmed in by Taos now, … […]

I disagree, mermaid sister – A picture CAN stop time; if a picture can’t, than nothing can. Of course, I’m referring to personal time, what we, as individuals experience as we breathe in and breathe out…..we can look at a picture and even move back in time…the concept reinforces the importance of pictures, whether “real,” ie, taken with a camera, sketched on a pad, etched into a rock.or whether in our minds, where only we have access to it. It may be unsettling, to see what “time” can do to a physical structure but that’s truth – the return of dust to dust. (just look at my house – I’ve got all kind of bodies scattered about!)…and I’m still trying to determine if you can go home again…at least I have pictures..